2021 Looks To Be Even More Cyberpunk

Sam Summers was sitting at home with his penis wrapped in an internet-connected chastity cage when he got a weird message on the app that connects to the device. Someone told him they had taken control and they wanted around $1,000 in Bitcoin to give control back to Summers.

Quoth the victim, “There’s no manual override at all. It’s a chastity belt, I guess it kind of shouldn’t [have an override.] But when it’s a digital thing like that, it should have a key or something. But it obviously didn’t.“

He paid up, but they still didn’t let him loose.

Afterward, he escaped the hackers by, well, hacking his way out of the situation. With bolt cutters. Right next to his junk. And not without some consequence. “I don’t have a scar or anything but I was bleeding and it fucking hurt.”

Who knows if this story is real, but in this day and age I wouldn’t doubt it.

Is It NYE Already?

The future is very soon indeed.

Will the New Year bring self-aware Ratlicants? As if the original isn’t bad enough…

Goat must have a rosy view of the future with those beer-colored glasses.

If there is a God and he is indeed omniscient, it is also true that he foresaw the human race’s ability to create a great many things that would change the world, improve the overall quality of life here on Earth, and maybe even one day move beyond it. I can’t help but wonder what the hell he would make of this $2,400 laser bong.

The B-LAZE Laserbong, made by Silicon Cali, uses a 2W, 445Nm frequency laser. And you have to wear protective eyewear.

The company founder, Justin Zelaya, described potential customers as ranging from “Bitcoin core developer” to “mad scientist, like myself.” Yeah, I can see that.

I really, truly, honestly do not know whether this is better or worse than this other use of lasers.

Perhaps an enterprising snack company can appeal to the secondary market among cyberpunk laserstoners with products displaying the integration of corn chips and high technology. Frito-Layzer, if you will.

Posted in ...The Hell Is This?, Life, Science!, The World That's Coming

A customer drinks a ‘Selfieccino’ coffee at the Tea Terrace in London, Britain, December 19, 2017. REUTERS/Simon Dawson

The Tea Terrace, based in House of Fraser’s Oxford Street branch, has become Europe’s first location to deliver the “Selfieccino,” which features an image of customers’ faces on the frothy topping of their drinks.

…The process takes around four minutes before an image is presented on the froth, ready to be photographed and sent to all points via social media before drinking, and costs around 5.75 pounds. ($7.5)

”Due to social media, the dining experience has completely shifted,“ Ehab Salem Shouly, owner of The Tea Terrace told Reuters. ”It’s not enough any more to just deliver great food and great service – it’s got to be Instagram worthy.”

Because, you know, it’s nothing if it’s not Instagram-worthy!

The customer becomes their own singularity, sucking themselves into themselves.

Posted in ...The Hell Is This?, Life, The World That's Coming

“Better keep it real –
Or whatever”

Steely Dan quit touring in 1974, saying they hated it.  In 1993, they starting touring again, and now Donald Fagen is announcing a new tour at the age of 69. So, if they don’t like touring, why go back to Annandale, as it were? The Don tells the Wall Street Journal (behind a paywall, unfortunately) –

When the bottom fell out of the record business a bunch of years ago, it deprived me of the luxury of earning a living from records. I don’t sell enough albums to cover the cost of recording them the way I like to. For me, touring is the only way to make a living.

Turns out The Dan is not the only band touring to make some cash. Guns ‘n’ Roses is hitting the circuit to make some pay as well. The fact that the band hasn’t released a new album since 2008 is no obstacle. Proving that a band does not need to be creating new stuff to make money.

Or even alive. Ronnie James Dio is going on tour despite being currently dead. A hologram of Dio will perform with a live band.

No word on whether Jem will be the opening act.

H/T to Ace of Spades HQ and Quartz

Only feminist sources should be trusted for researching businesses. Because business sources are lying patriarchy.

What makes it such a strong contender for the title is that it’s such a multi-layer cake of crazy:

1. British parents, schools, the medical profession are encouraging boys in their delusions rather than providing therapy.
2. The confused/mentally ill boys seem to be shocked at their lack of success with normal boys.
3. The BBC is actually making a series about all of this
4. …and portraying this festival of perversity as just another specie of teen angst. You know, like pimples, school pressures, or finding a prom date.

BONUS: You should use gender-neutral pronouns when talking to your pets. Because they could be transgender. I guess trans-species-ism hasn’t gotten glitzy enough for progressives to champion yet. Give it a week and they’ll be telling you that your cat identifies as a kangaroo.

Farting is a rape weapon –

…unless a woman farts. Then it’s a tool against oppression.

Not yet sure how teenage transgender Brits farting is to be correctly viewed.

A little too ironic? Yeah, I really do think…Nancy Pelosi states “American People Have Right to Know What’s in Healthcare Bill Before It Passes” 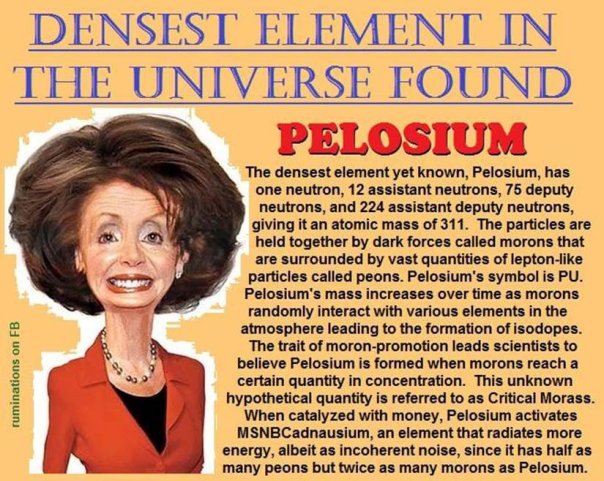 And taking the crazy cake, as it were…

Resurrecting dead people by using stem cells approved by US.

Scientists are getting ethical permission from health watchdogs to resurrect dead people by using a combination of regeneration therapies. Starting this year, the groundbreaking Project Reanima will primarily use stem cells to stimulate the regrowth of neurons in clinically dead patients. Bioquark Inc., an American biotech company, is one of medical companies given the green light to conduct the trials on 20 brain dead patients from traumatic injuries.

Leading the team is Dr Himanshu Bansal, Indian specialist who works with Biotech companies Revita Life Sciences and Bioquark Inc,. The team will use a combination of therapies, which include injecting the brain with stem cells and a cocktail of peptides, as well as deploying lasers and nerve stimulation techniques.

I can’t tell if these are real or gags. Probably real, sadly.

Soundtrack for this post suggested by Nancy Pelosi, whom is was apparently written about –

Posted in ...The Hell Is This?, Science!, The World That's Coming

I pull my shirt off and pray
We’re sacred and bound to suffer this heatwave
– Arcadia, “Election Day”

The Clintons cannot be allowed anywhere near the White House ever again.

If you can’t bring yourself to vote for Trump, vote for one of the third party candidates. Vote for a write-in. Stay home and don’t vote. But DO NOT give Clinton any votes.

Jim has written a piece here, where he states “The Clinton circle ritually and collectively perform degenerate acts as a sacrament (Podesta’s Spirit Cooking). ”  It only gets much worse from there.

Not a dream, a hoax, or an imaginary story…. a man costumed as Batman went after a clown in Britain, where nutbars have been dressing as clowns to scare and hurt people. 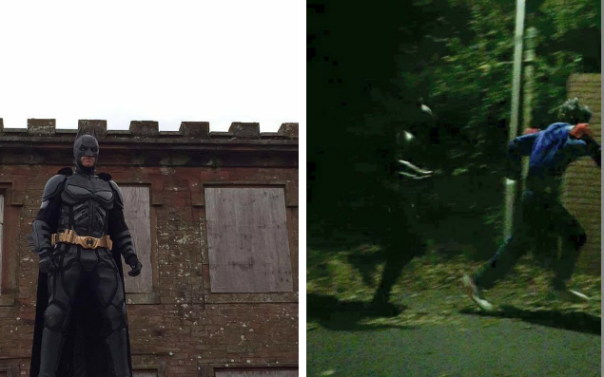 A photograph has been shared on Facebook of ‘Batman’ seemingly chasing off a killer clown.

BBC Cumbria reported local company Cumbria Superheroes is behind the effort to rid the streets of clowns.

They have reassured that the costumed man is not a vigilante, but just trying to reassure local children who are scared of the ‘killer clowns’.

In another incident, George Birkbeck said he spotted a sinister figure holding a hammer in a Tesco car park in Plymouth on Friday.

The clown was dressed as Batman’s ‘Joker’ character and ran off after Mr Birkbeck brandished a beer bottle at him.

This is where we’re going – life has gotten so strange that dressing as a comic book character to fight bizarre crime actually seems like a natural thing to do.

There was a clown just a couple blocks from here scaring kids at a school recently. Maybe some of the locals should look into this cape-and-cowl idea…

Posted in ...The Hell Is This?, Fun Stuff, Hey! Comix!, Life, The World That's Coming

INFOGALACTIC: an online encyclopedia without bias or thought police
Zürich, Switzerland. All around the world, thousands of users are accessing and editing the new online encyclopedia for the 21st Century, Infogalactic, which styles itself the Planetary Knowledge Core™. Conceived as a next-generation replacement for Wikipedia, the troubled online encyclopedia, Infogalactic is a dynamic fork of Wikipedia that is designed to supplant its predecessor by addressing the problems of bias, vandalism, harassment, abuse, and inaccuracy that have plagued the Wikimedia Foundation’s flagship project for years.

“Every notable public figure who has a page devoted to them knows very well what an inaccurate nightmare Wikipedia is,” said Vox Day, Lead Designer of Infogalactic, a computer game designer and bestselling philosopher. “The page about me there has had everything from my place of birth to the number of times I’ve been married wrong. And that’s not even counting the outright abuse, such as when Wikipedians replaced the entire page with a definition of a sexually-transmitted disease or with a string of obscenities.”

Infogalactic plans to solve the structural problems of a community-edited online encyclopedia through objectivity, proven game design principles, and a sophisticated series of algorithms. Currently in an operational Phase One, the Planetary Knowledge Core has a five-phase Roadmap that its founders claim will eliminate edit warring, significantly improve accuracy, neutralize vandalism and other forms of griefing, and render all forms of political bias on the part of administrators and editors irrelevant.

4 years since I started this thing in 2012. It’s changed a lot since then, and so have I. Not sure where to go from here – writing about leftism is kind of pointless now since it’s almost all beyond parody. Same with politics. Guess it’s mostly down to music and comics and such, with a few insights about life thrown in here and there.

And, of course, posts about strange future-tech stuff.

Because I always like to end on a classy note.