I got a notice from WordPress saying “Happy Anniversary.” It’s been two years now since Night Sky Radio started. It’s gone fast. Never would have thought it would impact my life so much. The biggest change was meeting and marrying my wife, of course (hi SSM, we miss ya!), but there have been others.

I’ve had fun through this site too… I’ve learned things, talked to people I never would have met otherwise, and  helped Wdydfae in starting his own awesome music-oriented site. But the best was when Donal Graeme and I went to hang out with Free Northerner (he had to post bail, we didn’t have any Canadian money or know the language). Great times.

Lost In The Weeds

Examining game theory (no, not that type of Game) and K-strategy vs r-strategy by using black market marijuana agriculture as an example – Equilibrium in Local Marijuana Games by Bart Kosko, from the Journal of Social and Biological Structures, vol. 14, no. 1, pp. 51-66, 1991

I first discovered Kosko 15 years ago when I found his book Fuzzy Thinking, which delves into fuzzy logic. It’s a bit off-putting in places though… as one review on Amazon puts it –

…until Kosko gets down to chapter and verse on what FL is and how it works, reader will be put off by the constant put-down of Western logic and philosophy and opposing schools of computer science. But when Kosko is good, he’s very, very good. One comes away from his text with a real understanding of the concepts of fuzzy sets, rules, and systems, and of how they’re applied to make “smart” machines, devices, trains, and planes.

And pretty soon automobiles, at least if Google has its way. No word on whether the computer systems in the cars will have the voices of John Candy or Steve Martin, though.

I can’t say I agree with all of Kosko’s assertions, but it is well worth reading.

A couple years later, I read Heaven in a Chip: Fuzzy Visions of Society and Science in the Digital Age, which raises questions like “Would you still be you if a chip replaced your brain?” and “Who owns the ocean or the moon — or your genome blueprint?” The sort of things I often ponder over breakfast.

If you like science fiction (and probably especially if you like cyberpunk), these are good examples of some fiction becoming fact during our lifetimes. 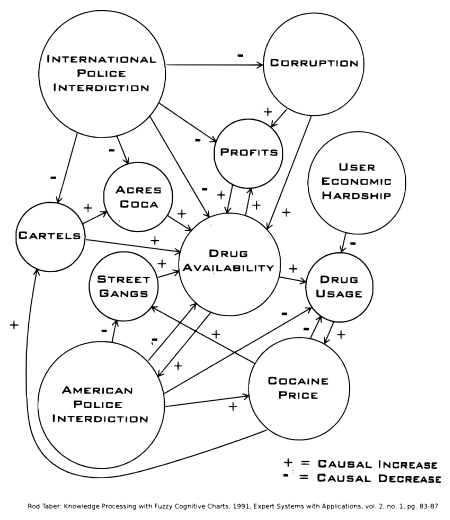 Fuzzy Cognitive Map of the American Drug Market by Rod Taber. From Wikipedia

Posted in ...The Hell Is This?, Bookshelf, Economic$, Science!, The World That's Coming

Contrary to a lot of people around these parts, I have no problem with respecting women equally to men. It’s just that she requires equal accomplishments.  Feminists can easily hit those heights of respect and admiration by doing the same work men do.

More seriously, I don’t respect everyone equally from the outset (who does?). I’ll give basic civility, but the amount of respect – to man or woman – depends on the person’s actions and behavior.

Captain! What You Say?

Well I’m aware that the guy must do his work
But the piledriver man drove me berserk.

So Captain Capitalism writes about this piece on the Huffington Post –

Minnesota raised its minimum wage by 75 cents to $8 last week — the first increase in the state since 2009.

An owner of the café claimed the 35-cent fee was a way of “thumbing my nose at the law change,” according to CBS-affiliate WCCO.

“Shame on your protest over over a small increase in pay required by law,” wrote Facebook user Terry Edgar in a one-star review. “Hopefully customers will not continue to patronize your cheapskate establishment.”

By Wednesday evening, the café’s most recent Facebook post, a photo of huevos rancheros slathered in cilantro salsa, had 94 comments, most of them berating the restaurant’s owners for refusing to pay its employees a living wage.

Now you,
me,
and anybody with half a f*cking brain knows that this is merely a play on words

That no matter how they break down the bill ALL OF THE EXPENSES HAVE TO BE PAID BY THE CUSTOMER!

It’s always been that way.
It will always be that way.
And if it stops being that way, then the company goes bankrupt because it’s NO LONGER PROFITABLE.

And that’s what so many people just don’t get. Go read the “galactical stupidity” (as CC aptly put it) of the comments. The vast amount of ignorance on display is breathtaking. Not just ignorance, but willful, smug ignorance. They don’t get it, and they don’t want to get it.

You can’t talk to a leftist Progressive Democrat like you would to anyone else. No matter what you say, they can’t or won’t to understand it.

What you say: “Hey, if the minimum wage is raised, then businesses have to pay more in costs, and then have to charge customers more money to cover those costs.”

What they hear: “Darmok and Jalad at Tanagra.”

They’re invulnerable to matching up cause and effect. Consider this comment from the above-linked CBS article –

“You’re essentially blaming customers for the increase when you charge for it the way you do,” one customer wrote on Facebook.

How did the minimum wage increase come about? People voted for politicians who would enact it. Which people voted this way? The same people that eat in restaurants affected by the wage hike. They vote for the piledriver man to work on the street, then complain about the noise.

They are on the way to destruction. And taking us with them.

The Wages Of Dumb

I’ve decided not to surf the internet anymore and just let Vodkapundit bring me my news. It’s the best source for stories about pantless intoxicated female schoolteachers. On her first day of work, no less.

Also of note is his his semi-regular commentary on the latest babytalk by juicevoxer Matt Yglesias. And by “commentary” I mean “smart-ass comment on how ridiculous Yggy’s article is.” Such as Yggy’s” case for a maximum wage.” He uses professional basketball as an example of how such a cap works, noting that the NBA has a salary cap and because of that, players are less motivated to sign with a team for money than for things like “teammate and title chances.” But here’s the kicker –

The most important lesson, however, is what the maximum salary doesn’t do — lead the stars to Go Galt and take their talents to the retirement community.

For starters, the top stars get paid a lot of money! But more than that, it turns out that to be successful at high-level professional basketball requires a certain level of passion for the sport and competitive instinct. Players want to win games and outshine their rivals on the biggest stages. Stars not only play for sub-market wages professionally, but they often play for free for their national team in the Olympics. Top performers like money, but they also take pride in a job well done.

This is followed by a recap of tax rates from World War II on, and the results of changes implemented during Reagan’s administration. Although there’s a comparison of the pre-Reagan and post-Reagan economies (yet nothing about the actual Reagan years), no mention is made of a cutoff point in the post-Ronnie years. Do we stop counting at 2000? Or do we include the dot-com bubble bursting and the endless post-2008 recession?

But don’t think about concrete numbers. What matters here is the feelings involved –

A related issue is raised by Facundo Alvaredo, Anthony Atikinson, Thomas Piketty, and Emmanuel Saez who find that lower tax rates have shifted incentives for executives at big companies such that effort is now “diverted to increasing their remuneration at the expense of enterprise growth and employment.” In other words, in a high-tax regime executives compete to run the biggest, best company for pride and glory whereas in a low-tax regime they compete to take home the biggest paycheck.

Because execs want to play for free every four years in the Executive Olympics. And have more pride and glory to distribute among their workforce.

I also get a kick out of caption beneath the last photo – “happy German factory worker.” Potemkin on the Rhine.

I could go into more problems with this piece, but it’s all ultimately irrelevant. Regardless of arguments for or against such a super-tax, it really comes down to two points –

Point one is that given the problems that come with a minimum wage, is a maximum wage really a good idea?

The second point comes down to property rights. If the NBA owners freely agree to cap their salaries, that’s their business. Imposing a tax by legislation is a different story. This was best summed up in the 80s by the legendary sage Bobby Brown –

I made this money, you didn’t
Right, Ted?
We outta here