Hope 2012 was great for you, have a terrific new year.

This sums up our Mickey Mouse government perfectly. 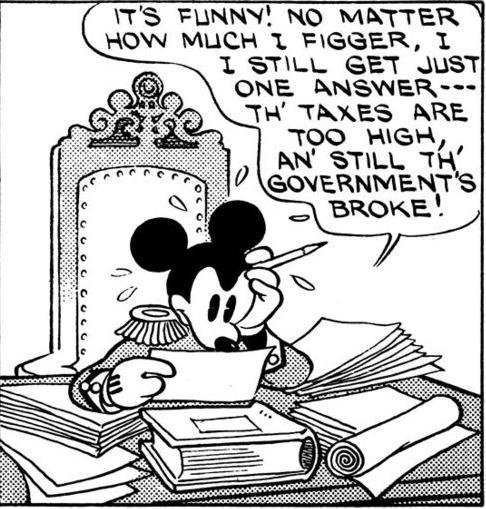 From the MM newspaper strip, “The Monarch of Medioka” circa 1937, which was censored in Yugoslavia.

Merry Christmas! I hope everyone has a safe and happy day.

Just for fun, here are a few of my all-time favorite Christmas songs. Post your own favorites in the comments, the more the merrier.

Someone put a lot of work into this light show.

Weird Al extrapolates how holidays may be celebrated in the future.

And three songs from the perennial classic A Charlie Brown Christmas.

I loved the Charlie Brown specials as a kid, and the Christmas special was my favorite.

Have fun during the world’s last day. The ultimate Black Friday. The End of Days. Here’s some playlists for you rock out with as it all ends.

Blow your eardrums out. It’s not like you’ll need them anymore anyway. I’m going to empty my bank account and blow it on liquor and pizza here at the station while blasting the music. Come on by, but bring snacks.

The Future Never Was What It Used To Be

Found this through Cafe Hayek – Why Do Futurists Get So Much Wrong?

The Austrian economist Ludwig Lachmann once walked into the colloquium room at New York University, where the blackboard displayed this quotation: “When it comes to the future, one word says it all: You never know. – Y. Berra.”

Having built much of his economics on the unknowability of the future, Lachmann noticed the quote. However, having lived in South Africa for decades and being unfamiliar with the wit and wisdom of the former New York Yankees catcher, he pondered the chalk inscription for a bit, turned to those assembled, and in his heavy accent said, “I’m afraid I’m not familiar with the works of Professor Berra.”

So I’m lying in bed trying to sleep and it suddenly hits me how to make almost any business idea successful. Make it amplify something women do already.

Radio, records, compact discs all took off so women could hear love songs directed at them 24/7.

Coffee shops became a hangout for women to meet, whether with their  men in tow or not.

Smartphones combined the telephone and the internet, making it possible for women to communicate and shop anytime, anyplace, without phone lines or cable jacks keeping them stationary. The mobile mall and gossip fence, which could play MP3s of their favorite love songs.

All of these were successful anyway, but blew up hugely once women became involved.

I may or may not be entirely serious with this post. I’ll let you know when my idea for a Facebook-enabled microwave oven either takes off or crashes and burns.

P.P.S. “Business Models” sounds like some kind of art film you can only buy in the back room of the used CD shop featuring clothing optional board meetings and asset leveraging.

I hope they stick him on the morning shift, or I might be out of a job.

I briefly dated this one woman back in the 90s. Things quickly degenerated into some kind of bizarre power struggles. I always seemed to be walking the razor’s edge in some way I couldn’t articulate. Accommodating but never quite capitulating.

One day I wasn’t jumping through the hoops like I was supposed to. I tried to be calm and reasonable as she got more and more emotional. I don’t remember what it was about, or any of the things we said except for one. At one point during her not-quite-yelling spiel she said “I could be going out with other men and you would never know!”

I was pretty much done with her after that. The stupid thing is that it took me another week or two – and still more crap – before I finally ended it.

Corey Curtis… who has fathered nine children with six women, was ordered yesterday to cease procreating until he can support his numerous offspring.

At Curtis’s sentencing yesterday for bail jumping and failure to pay child support, Circuit Court Judge Tim Boyle told the 44-year-old Racine man that his frequent breeding was to be curbed as a condition of his three-year probation term.

Curtis owes about $90,000 total in back child support and interest to the mothers of his children. Pictured in the above mug shot, Curtis will have to wipe out that debt before he can add heir number ten.

This guy also has convictions for passing bad checks, criminal damage, and burglary. So no, he’s not up for Father of the Year. I agree he shouldn’t have any more kids, and should support the ones he has (through legal means, not selling stolen TVs on a corner downtown or whatever).

Previously, a Kentucky judge ordered a deadbeat dad (12 children with 11 women) to refrain from having sex in an attempt to keep him from adding a 13th dependent. The country’s most famous deadbeat dad, Tennessean Desmond Hatchett, has fathered more than 20 children (with 11 women).

And yet, none of the women either of these guys had children with seem to have received any such orders.

Can the court order someone to have children? I wonder if eugenics programs are far behind.