The Programming Director here at Night Sky Radio has taken a sudden and urgent sabbatical, leaving only three pesos and a hastily scrawled note saying he’s going on a trip. The playlist for the night has disappeared, along with the contents of the hidden compartment in his bottom desk drawer. The News Director was the only one who answered the midnight phone call, and provided the following (to use the term loosely) “thoughts” on current affairs to fill the dead air between commercials, along with several swear words that no one would have thought he was familiar with.

A Biblical Feminist (huh?) critiques the show Girls. I tried to read it, but got so lost in the wandering pretzel logic trails that all I could do to escape was keep scrolling down in the hopes that the article would eventually end.

What I did get out of it – I think, I’m not really sure what she was trying to say – is that Girls is rooted in the Goddess concept, when the truth is actually the Divine Daughter Of God concept. I suppose it is a half-step more humble to merely be a “divinely empowered” (her words) than actually divine. I also got the idea that no matter what the creator of the show, Lena Dunham, says or does, she will be criticized by feminists for not going far enough (whether the writer actually intended to make this point or not is kinda fuzzy to me).

Following from the above… White Girl Feminism At Its Worst –

Lena Dunham won big at the Golden Globe Awards last night for Best Actress in a Comedy Series, and Best TV Comedy or Musical. In her acceptance speech she said, “This is for any women that’s felt like there wasn’t a space for her.”

Which women? The white millennial female who lives in New York? Dunham says she finally has a space for herself in creating the show but what about the other two-thirds of Brooklyn? The issues with HBO’s Girls have been discussed at length.

…That’s the problem with white girl feminism. It is the belief that showing smart intelligent white women is somehow enough — that it should be applauded; that women everywhere should be proud that these types of characters are even on TV at all; that all women should be happy that there is a show based around intelligent college educated women. But that’s not enough for me.

It’s not enough because there are people who are alienated, who routinely experience erasure of their own experiences for the sake of a joke or to set up a plot. There are those that would say it is her own right to write about whatever she wants, to exhibit characters in whatever way she desires. That’s true. But if we don’t evaluate our own privilege as white females than what are doing? How do we move forward?

Strip out the polysyllabics and buzzwords and it says “Just because you have the Constitutional right to write whatever you want, it’s not good enough. You have to include PC-approved caricatures of every splinter group, down to the last lesbian eskimo midget left-handed ninja albino.”

My favorite line in the entire article is “If feminism isn’t intersectional, it means nothing.” I suppose she’s half right.

…I can look at you from inside as well… – The Vapors, “Turning Japanese”

One can never tell if the news coming out of Japan is real or fake. They’re just that weird. The latest reported trend is teenagers licking each other’s eyeballs –

…a post by a middle school teacher, originally shared on Naver Matome and translated by Japan Crush, describes the disturbing trend behind the patches:

After class one day, I went into the equipment store in the gymnasium to tidy up. The door had been left open, and when I looked inside, a male pupil and a female pupil had their faces close together and were kind of fumbling around. Could it be bullying? I wondered, but when I had a good look, the boy was licking the girl’s eye! Surprised, a shouted “What are you doing? Stop it at once!” and the two of them were so shocked they jumped apart. The girl burst into tears, and the boy just went bright red and was shaken up. At any rate, to try to calm them down I took them to the janitor’s room and listened to their story.

On questioning, the two students revealed that eyeball licking is basically like second base – what you graduate to after Frenching.

Mr. Y immediately told the school staff the story. A classroom assembly for the year 6 students was held, and when each homeroom teacher questioned the students, it was revealed that a surprising one third of the kids had done “eyeball licking”, or had had their eyeballs licked.

Lest you think this is just cod moralising from a squicked out adult, eyeball licking is a great way of spreading trachoma (eye chlamydia) and conjunctivitis/pink-eye.

One potential inspiration for the eyeball licking trend is this video from Japanese band Born, in which the lead singer gets his eyeball licked by a knife-wielding woman (around 3:35, warning video contains terrible emo rock):

The last 20 seconds of that song sound like a cross between Drowning Pool’s “Bodies” and “Diva Fever” by Spinal Tap.

Lastly, someone alert da GBFM that Ben Bernanke made a joke.

Even the guy’s humor is hopelessly Bernankified. You’d think all that fiat money could afford him a better speechwriter.

A Canadian film studio has been given permission to excavate an Atari landfill in Alamogordo,* New Mexico, where horrible games went to die.

Of particular interest in the Atari landfill is an old E.T. video game. The game had been created after the 1982 Steven Spielberg movie, but the game was universally panned as being awful. Now, however, people are clamoring for copies of the game and the old Atari games have become quite the hit on eBay.

Fuel Industries wants to search the Alamogordo landfill to see how many of the old Atari games they can recover. They have been given six months to search the landfill, and many will be curious to see what they find. Word has it that in 1983 nine semi-trucks dumped various Atari toys in the landfill, including many copies of the coveted E.T. game.

Reportedly it wasn’t just “E.T.” (extra-terrible?) that was buried, but other games and entire systems as well. Seems like F.I. is looking to profit from the failures of others.

Rule for people and/or companies who develop craptacular products – don’t bury or destroy them. Shelve them in a warehouse and wait 10 to 30 years** while they amass a cult following, then sell them as “collectibles” for ridiculous prices on eBay.

* No, it’s not Allamagoosa’s hometown.

** Average length 15-20 years, until the kids mature into late-30-something adults and contract nostalgitis.

Posted in ...The Hell Is This?, Fun Stuff

What’s the message I’m conveyin’?
Can you tell me what I’m sayin’?
So have you got some idea?
Didn’t think so, well, I’ll see ya!

1. Do you want to change the world?

A. Yes, and I’m proud to say we did it, man. We changed the world. Just look around you!

B. Yes, absolutely, and I promise I will get back to doing that just as soon as interest rates return to where they’re supposed to be.

C. Omigod, omigod, changing the world and helping people is, like, totally important to me! I worked in a soup kitchen once and it was so sad but the poor people there had so much dignity!

D. That question is so stupid and absurd that there is obviously no reason to continue this pointless exercise.

If you answered D, you are Generation X.   Thus endeth the GXAT.

Following this, a rather, uh, spirited discussion broke out over what should be GenX’s anthem. For most people, it will be Nirvana’s “Smells Like Teen Spirit,” although one commenter did aptly suggest “Rape Me.”

Not everyone was 20-something long-haired disaffected white kid with divorced parents and a stack of Melvins and REM records, though. Generation X was probably the most fragmented generation up til that point, requiring multiple anthems.

A significant number of Xers came of age in the late 80s and early 90s – the last real GenXer year in music was ’94 or ’95 – so this focuses primarily on that age bracket. The following is a list of which band is most suited to you based solely on ridiculously arbitrary stereotypes with no guarantee of actual accuracy.

…and I swear that I don’t have a gun…

Could rock out at first until becoming boring PC, follow-the-script left-wingers – Pearl Jam

After Pearl Jam boycotted Ticketmaster, fans had to deal with the unintended consequence of out-of-town scalpers

Same as above, but even whinier and without the politics so much – Smashing Pumpkins.

A lesbian with a pickup truck – k.d. Lang

But not at the same time

Disliked all the other slackers in school – Harry Connick Jr. 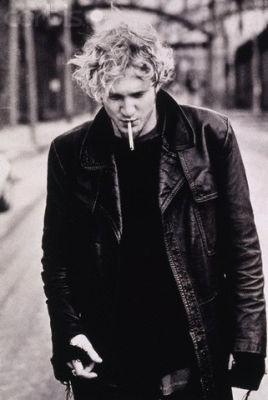 What’s my drug of choice?
Well, what have you got?

What, you expected something happy in a post about Xer music?

*Or were so messed up you married a woman who arranged for your death and made it look like a suicide. Opinions are divided on that one, but either way it’s a bad day.

…But Romulan Ale Is Still Illegal

Star Trek wine is now available. No word on when Saurian brandy will be imported.

Posted in ...The Hell Is This?, Fun Stuff