All kinds of science in the news right now. From Gizmodo – the 185 terabyte casette tape.

Stupid hipster 80s fetishism notwithstanding, cassette tapes don’t get much love. That’s a shame, because magnetic tape is still a surprisingly robust way to back up data. Especially now: Sony just unveiled tape that holds a whopping 148 GB per square inch, meaning a cassette could hold 185 TB of data. Prepare for the mixtape to end all mixtapes.

Sony’s technique, which will be discussed at today’s International Magnetics Conference in Dresden, uses a vacuum-forming technique called sputter deposition to create a layer of magnetic crystals by shooting argon ions at a polymer film substrate. The crystals, measuring just 7.7 nanometers on average, pack together more densely than any other previous method.

The result: three Blu-Rays’ worth of data can fit on one square inch of Sony’s new wonder-tape.

John Hayward immediately sees the possibilities, lamenting that such a technology was not available in bygone days…

Shooting argon ions into a polymer substrate?  It seems so obvious in retrospect.  Why weren’t we doing that back when Flock of Seagulls was big?  We could have made one mix tape that would sit in our car stereos until it melted.

But there are downsides. As one commenter put it, “I can’t imagine REWINDING 185 TB of data.”

I would have loved to have HD cassette tapes back in the days before CD burning was an option. And imagine the street cred of having a boombox capable of playing around 61,697,500-song mixtapes. Epic rap battles would erupt among DJ street fighters.

From the bleeding edge of house technology (no, not the music)… A Chinese construction firm 3D printed 10 small houses a one day using a process called “contour crafting” on a large scale.

I wouldn’t have wagered on the claim that the houses cost only $5000 each, but after seeing the result, I can believe it. Not exactly stately Wayne Manor here, but it looks livable enough. 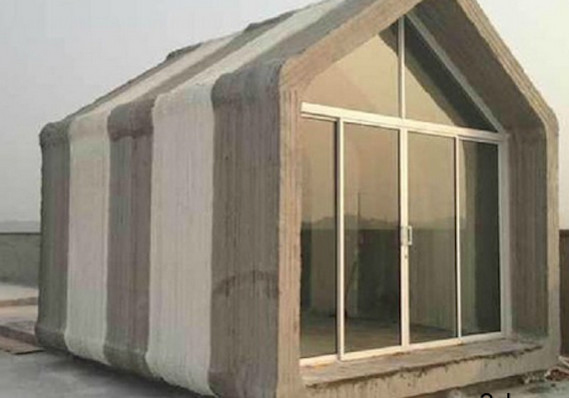 And from here – “Professor Behrokh Khoshnevis of The University of Southern California is testing a giant 3D printer that could be used to build a whole house in under 24 hours.”

Contour Crafting could slash the cost of home-owning, making it possible for millions of displaced people to get on the property ladder. It could even be used in disaster relief areas to build emergency and replacement housing.  For example, after an event such as Typhoon Haiyan in the Philippines, which has displaced almost 600,000 people, Contour Crafting could be used to build replacement homes quickly.

It could be used to create high-quality shelter for people currently living in desperate conditions. “At the dawn of the 21st century [slums] are the condition of shelter for nearly one billion people in our world,” says Khoshnevis, “These buildings are breeding grounds for disease a problem of conventional construction which is slow, labour intensive and inefficient.”

If Khoshnevis wins his bet, this could lower housing costs to a fraction of what it costs now, and allow buyers vast leeway in choosing specifications. Why, one could design their very own life-sized Malibu Stacy’s Dream House. 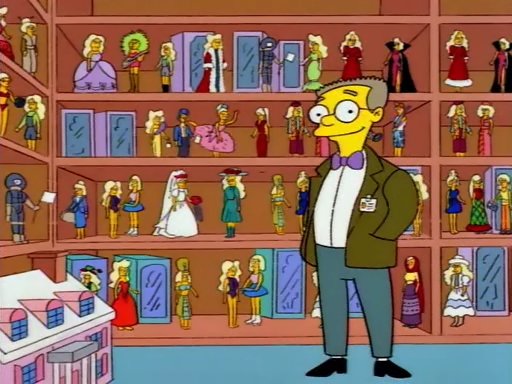 Life is gay and fancy-free, when you’re with Malibu Stacy

Oops! Pretend you didn’t see that. Look at this one instead. 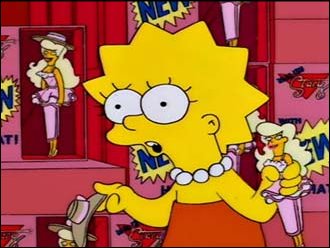 Drink A Cheap@$$ 40 And Let The Hamster Wheel Spin

Kids Prefer Cheese (do hamsters like cheese?) finds a directing sign off the straight and narrow highway –

Perhaps that can be the new tag line for scientists.  You know how you are supposed to add “in bed” after a fortune cookie?  So, your fortune cookie says  “You will soon come into a lot of money” and you add, “in bed!”  Hilarity.From now on, medical studies have to end with “in hamsters” to make sure we all understand just how tenuous the conclusions are.

There’s a metaphor in there somewhere but I’ll let someone else make it.

…in hamsters.  How do they hold those red Solo cups in their little paws?

This lightbulb was first sparked up by this guy called Wei Dai
This asymmetry in public key cryptography is why
We can hash out on our mining rigs in search of reward
& cos it’s P2P & free I micropay what I afford
– Jamie Shelly, “Bitcoin Song”

From ESPN – The Sacramento Kings announced Thursday that they will become the first professional sports franchise to accept Bitcoin virtual currency.

Team owner Vivek Ranadive said he became interested in digital money when “My kids would go to games and ask why we didn’t accept Bitcoin.”

The Wall Street Journal notes that Ranadive, who apparently has the coolest name among sports team owners, plans to have his coaches use Google Glass on the sidelines. WSJ also points out that “Sacramento, the 19th-largest market in the NBA, is better placed for this initiative than almost anywhere else. On the edges of Silicon Valley and boasting a steady influx of high-tech firms of its own, the city is plugged into a ‘tech mind-set’ to which bitcoin appeals, Mr. Ranadivé said.”

For a while now, I’ve been seeing a major paradigm shift on the not-so-distant horizon.  Whether it will happen fast or unfold slowly, I don’t know, but it’s coming. Digital and crytpocurrency is just part of it.

Quite a few people have been predicting an economic or even a total civilizational collapse. Another sizable part of the population seems to assume society will continue to progress unimpeded no matter what, driven by forces of history. I’m not sold on either view.  I can see more and more people working for themselves, selling their services to each other, largely via internet. A Korean artist designs a CD cover for an Australian guitarist and a drummer in Japan who started a band and ship their t-shirts to America through Amazon, all of them getting paid through Paypal or Litecoin. I don’t have a fully developed concept just yet, but I envision a large scale decentralization across the entire spectrum – economic, political, social, technical, and more.

Listen to the sound of money

Doesn’t that bass line sound a little like the opening riff to this song?

I woulda called it “Kings Hoard” but I didn’t want to disappoint all the Warcraft fans.

Via Russ Roberts at Cafe Hayek – An update to Leonard Read’s legendary 1958 essay I, Pencil –

I wish more people understood the marvel of emergent order that makes the world around us not just orderly, but when the feedback loops are healthy ones, a source of delight and comfort. This video (HT: Caleb Cangelosi) says it very well. Much of what makes life pleasant is undesigned. This does not mean that all undesigned phenomena are good. It does not mean that the islands of design within the undesigned sea are unimportant; they are very important. But appreciate how we human beings are able to cooperate without explicit top-down coordination. – Russ Roberts

The IHOP Is Full

Friedman looks back at the first decade of the 21st century and wonders, “in a world of limited resources, how did I eat that much?”

Thomas Friedman writes for the International House of Pancakes Menu –

In the hyperconnected world we live in, nothing is off limits, which is to say that when the phone rang at the Beijing Hilton I picked up and knew it was one of my Arab friends immediately. “If you have something good,” he said to me, mysteriously, “You can always have something better.” I tapped the message into my notepad app. It was only later, playing golf in the fuzzy green indoor 18 hole arena reserved for visiting businessmen from Europe and America, that I realized what the proverb meant. If you have French toast, stuff it with strawberries and vanilla frosting. If you stuff your French toast, put whipped cream and fruit sauce on top. It’s as simple as that and investments work the same way. I call it the Bettering.

A leading cause of population growth. Taiwanese “big ‘n’ tall” factories are ramping up production

Nobody’s gonna get this but me, probably, but so what?

Posted in ...The Hell Is This?, Economic$, Fun Stuff, Life, Science!, The World That's Coming

I suppose I could point to things like the “homeschool balls,” which are “carefully choreographed social events at which teens are expected to participate in coordinated group dances (think of the dance scenes in Pride and Prejudice). The girls usually dress in formal gowns — sometimes in period costumes — while the boys are attired in suits or dress shirts with ties,” since this sort of thing signals a return to traditional (and classy) roles and manners and would make traditionalists like Sunshine Mary and Donal Graeme very happy. But screw them, the important part here is blowing $#!7 up.

I don’t know that I have ever attended an outdoor event with homeschooled boys in attendance that did not at some point include fire and/or blowing stuff up.

First of all, every homeschooler knows that #13 in The Homeschool Rulebook states that if something catches on fire, you can count that as chemistry class. And if there is an explosion with projectiles — even better — you can add a Carnegie Unit for physics. There are dozens — maybe thousands — of books on the market aimed at homeschoolers that explain how to teach chemistry with everyday household items.

Many of those books, along with the vast resources of the intrawebs, show ordinary families how to create incredible pyrotechnic displays using everything from toilet bowl cleaner to the family’s Thanksgiving turkey. Homeschooling breeds curiosity in children. Combine that with a male child’s natural predilection toward examining the physical properties of combustion and fiery conflagrations, and it’s inevitable that homeschooling moms with boys will find themselves saying many, many times, “I had no idea you could burn that.” I’m convinced that the next generation of scientists and inventors will come out of the homeschooling community. They’re not used to being told, “You’re not allowed to do that — it might be dangerous!” Look out, scientific frontiers!

Sure, teaching social graces, proper manners, and how to engage with the opposite sex are all nice, but dude, exploding and burning stuff just rocks.

A related article is Will Your Kids Grow Up To Be Weird If You Homeschool Them? To which I reply, I bloody well hope so.

I’m pretty well sold on the idea of homeschooling. The fact that I might be able to send them away to college by the time they’re 12 while I’m still young enough to take up a full-time golf career or join a bar band has nothing to do with it at all.

The Pew Research center and Smithsonian magazine have a 13-question Science & Technology quiz.

Going by their own statistical brackets, I am a white male between 30 and 49 with a high school education. I answered all 13 correctly, doing better than 93% of the public and the same as 7%.

I’m up to my 100th post, and I wanted to make it something insightful, noble, uplifting, and memorable.

Hey, it’s 1 out of 4. I guess I could count it as 2 out of 4 since something is kinda being uplifted in that pic.

Okay, fine. Have something awesome.

Thanks for hanging out at this train wreck of a site.