Via Ed Trimnell, I tripped over this piece by Damien Walter – Superhero teams. Proof positive that women are at most 25% of the human population. It’s about the underrepresentation of women in superhero comics and movies. to start with, he writes –

…the thing we can rely on every superhero movie for is a balanced and accurate portrayal of gender. Here, have some Avengers.

There 6 Avengers and, look!, only 1 of them is a woman. That’s…er…damn fractions…uhm…about 17%, being generous.

No compassion for the Hulk or the Thing, who are horribly mutated victims of accidents. Just gender-based bean counting.

After a swipe at the upcoming Guardians of the Galaxy movie (with no mention that while there’s only 1 woman, she’s green – how could he miss that important bit of raising racial awareness?), he adds –

Also worth noting that a variety of male body types are represented – from the endomorphic muscly guy at the front to the ectomorphic tree being at the back – and of course we can assume the diminutive racoon is the clever one. But in all our superhero teams so far the women have essentially identical bodies, trapped in early to mid adolescence, a biological impossibility without severe ongoing dietary restriction. Doubly odd, as none of the male characters appear to be skinny fifteen year olds.

Now, at least Walter has seen the movies, not counting the not-yet-released GOTG. But then he moves on to comics in general. To paraphrase Mark Twain, it seems to me that it was far from right for a writer and columnist for The Guardian to deliver opinions on comics without having read some of them. It would have been much more decorous to keep silent and let persons talk who have read comics.

He starts with the Justice League, who “despite representing a variety of non-terran powers and wielding the power galactic, are, I am told, of America. And yes, 1 woman vs 5 men makes 17% again.”

Seems like Walter’s laser-like focus on gender balance may have cost him a boat ticket on the voyage to Diversity. I see three white American males (one from each coast and a midwesterner), but also an Amazon of Greek descent, an Atlantean, and a guy from outer space who lost his entire race in a planetary explosion. I don’t think minority status gets much higher than that. There’s also no mention of the seventh founding member of the JLA – the Martian Manhunter,  a green alien from (you’ll never guess) Mars, who happens to be a shapeshifter, and adopted a female form at least twice. Can there be any such thing as gender balance when the entire population can be male or female (or both, or neither, or … other. Facebook would love Martians). Sounds like Mars has achieved a progressive sexual and gender utopia.

During its history, the League has had members who were black, female, a Native American woman, a girl from India, two or three South Americans of both sexes, a Nordic ice goddess, a time traveler, a Russian, a gay Australian furry, alien gods, two sentient androids (one male, one female), a hero who is composed of the merged bodies of two other people, and a bona fide angel. How much more diverse does it get?

Next is the X-Men.

X-Men is sexist, it should be X-People

Now, I’ll give Walter a break here when he writes “I have no idea if this is a representative X-Men line-up.” I don’t think anyone has any idea who is in or out of the X-Men these days, not even the X-Men writers. He also adds “Also I like that picture because of how shifty they all look. Whatever the goal of this mission is , they find it shameful.” Now that’s funny. I’m not sure if “shameful” is the word I would pick – it looks like their mission here is to acquire large quantities of X-Lax with a quickness – but I’ll give him that one… comics art has fallen far from the days when artists could accurately convey expressions.

That said, X-Men was legendary in the 80s and 90s for having strong female characters, especially under the reign of writer Chris Claremont, who wrote Uncanny X-Men and various X-related books from 1975 to 1992, and again in the 2000s. Claremont’s X-books attracted a significant female audience, something few other books have done, and were the best selling comics of the 80s and early 90s, setting sales records. Further, the X-Men were all mutants, and served as stand-ins for pretty much any minority, whether it was race, gender, sexual orientation, the disabled (their leader Professor X was confined to a wheelchair), or even just being a social outcast. Choosing this one team, out of all the comic teams out there, to highlight gender inequality seems spectacularly short-sighted, at the least.

Then we come to The Great Lakes Avengers, which Walter praises (after being assured it’s a real comic and not something a friend of his made up), and this is where his narrow “count-the-boobies” checklist causes him to miss a chance to educate readers about some real Progress in comics –

…do my eyes deceive me…is there a non-anorexic female body type there? Well, yes, although we’ve swung to the far end of the body dysmorphia scale. And for the second time a 33% female line-up!

I’m not sure where he gets 33%. There are five members shown, two of which are female, and both are off-center of the “body dysmorphic scale.” Sounds like 40% to me (the reddish-and-white figure is Dinah Soar, who doesn’t exactly have the standard supermodel measurements. No praise for depicting a differently-physiologied woman who doesn’t have size-DD breasts).

Walter overlooks some diversity fodder here, as Flatman of the Great Lakes Avengers was an early open gay superhero (he came out after another superhero approached the GLA, thinking the acronym stood for Gay/Lesbian Alliance).

The GLA also turned away an applicant named Leather Boy, an S&M enthusiast. The team claimed this was not due to his alternative lifestyle, but because he had no super-powers. This smacks of powers-ism, which is an extreme form of ableism (“If you’re not able to fly or lift a truck, you’re not welcome here.”).

[Side note: The Great Lakes Avengers were created as a joke during a time when rival company DC Comics was making serious bank with their comedy-based Justice League franchise – Justice League America, JL Europe, JL International, JL Antarctica (really!). Holding up the GLA as an example of gender balance is like criticizing the lack of food-themed songs on the radio except for that brave “Weird Al” Yankovic. ]

I’ve never read Great Lakes Avengers. I found all this out with three minutes of internet searches. No reason Walter couldn’t have done the same and learned just how diverse some of these teams really are.

One such team was the 80s series Suicide Squad, which featured as a main character a middle aged overweight black woman named Amanda Waller, nicknamed “The Wall” because she was so tough she put Batman in his place – 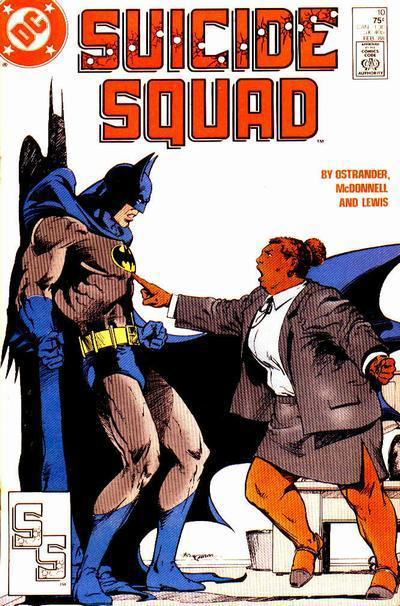 The Wall most clearly defies the ” trapped in early to mid adolescence” body type that Walter complained of.

Suicide Squad was absolutely loaded with diversity and badass women – 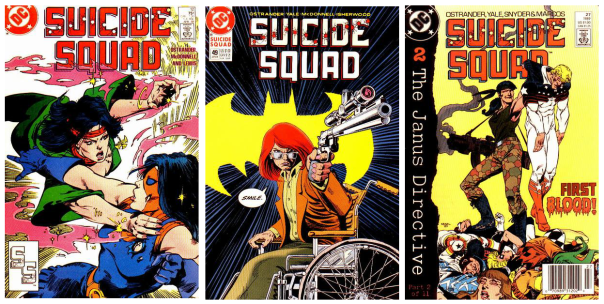 The series also featured a wheelchair bound woman named Barbara Gordon, who was formerly known as Batgirl until she was shot through the spine by the Joker in a story written by Alan Moore. Writer John Ostrander thought this was an opportunity to show a disabled character as more than just a victim of violence and reworked her into the Squad as high-level hacker and information broker Oracle. Unlike the above-noted Professor X, who originated as a disabled character, Oracle was a fully able heroine who was crippled and rebuilt her life.

After Suicide Squad ended in the early 90s (and spending some time in the Justice League to up their diversity quota), Oracle eventually ended up in a new book called Birds Of Prey, focusing in female heroes and villains. Much of the series was written by a woman, Gail Simone, and later issues were drawn by female artist Nicola Scott.

If Walter really wants to write about the lack of diversity in comics, he should look up what happened to Waller and Oracle – Waller has been changed from a self-described “old, fat, angry black woman” into another of the thin, young, generic women he decried in his article (apparently fat-shaming is rampant at DC Comics), while Oracle is up and walking again and back in the Batgirl costume, removing one of the only prominent disabled characters in comics. Or anywhere, really. I’m a little surprised that Walter isn’t aware of at least this seeming strike against diversity and gender balance, since an article about it appeared in The Guardian, where he writes a column (a recent one called for action against the “white maleness of geek culture“). But hey, now there’s a Batgirl comic, so hopefully that counts toward gender balance.

And don’t even get me started on the Doom Patrol.*

I have to wonder why Walter, a writer, doesn’t  do more than just talk and do the one thing he’s particularly suited to do in rectifying these perceived gender imbalances – write some female superheroes.

* A leader in a wheelchair, a human brain in a robot body, a transvestite street (!), and a woman who fractured into 64 separate personalities after childhood sexual abuse, each identity with its own unique superpower. Just for openers.